What has become known as the “Ambazonia War of Independence or Anglophone Crisis” in the English speaking part of Cameroon (North West and South West Regions of Cameroon) seems hopeless over four years now, especially with the persistent deadlock between the government and separatists. The ongoing tit for tat violence is not only steadily plunging the entire country into a civil war, but has resulted in thousands of civilian deaths (the majority of which are youths), general insecurity, hostage takings for ransom, extortions, closure and burning of many schools and economic centers, destruction of roads and other infrastructure, the burning down of villages, horrendous abuses of Human Rights, untold suﬀerings of hundreds of thousands of refugees in neighboring countries and more than a million internally displaced persons. According to Henrietta Fore, general directress of UNICEF, since 2016 some 850,000 children have been deprived from schooling in the English Speaking part of Cameroon.

Moreover, the youth population, which constitutes more than 70% of the total population of the conﬂict regions, are the most radicalized, manipulated, engaged and violent in this conﬂict. Unfortunately, youths as a conceptual category are frequently ‘othered’ in the discourse on conﬂict especially in a high-level peace process from politicians, who themselves are beholden to a wide range of constituents and interests, which might not be any recipe for durable peace. Therefore, youths are often seen as potentially dangerous ‘subjects,’ the main protagonists of criminal and political violence. They are easily vacillated between the two extremes of ‘infantilizing’ and ‘demonizing’. That is to say, on the one hand, youths are viewed as vulnerable, powerless and easily manipulated. On the other, they are feared as dangerous, violent, apathetic and as threats to security.

The above notwithstanding, it is our conviction in designing this project that there is a critical and urgent role that the youths in this conﬂict stricken area have to play in peacebuilding and the transformation of the conﬂict. What Rohi Foundation (Euphrates Chapter Cameroon) underlines is that the youths of the English speaking part of Cameroon are to be conceptualized, studied and empowered as agents of positive peace in terms of addressing not only the challenges of physical violence, but also the challenges of structural and cultural violence, and the broader social change processes.

Presently, Rohi Foundation (Euphrates Chapter Cameroon) is working on extending this project that aims to de-radicalize and reduce youths’ vulnerability to the violence in the English Speaking regions of Cameroon by training some youth peacebuilders on civilian peace practices. This project is in its extension phase. The objectives of this project in this initial extension phase include to:

Aim of the Project

This project aims at educating citizens on peace values through Peace Education Clubs.

What is a Peace Club?

What does a Peace Club require?

Club participants in turn, are expected to use the knowledge acquired from Peace Education Clubs in three ways. They have to share this knowledge with:

Activities in a Peace Education Club

Peace education is the process of acquiring the values, the knowledge and developing the attitudes, skills, and behaviors to live in harmony with oneself, with others, and with the natural environment.

One may also ask: why is peace education important? First, peace is a divine and fundamental human right for everyone. Therefore, its promotion and protection can guarantee all other human rights such as: right to life, right to physical and moral integrity, right to health, right to education, right to shelter, right to food, right to security, etc. The absence of peace undermines conditions essential to realizing human worth and development because war erodes human dignity. Dr. Martin Luther King Jr. once stated “Wars are poor chisels for carving out peaceful tomorrows.” And Gandhi, one of the greatest followers of Jesus’ teachings, once reflected on Jesus’ command not to seek revenge and averred “An eye for an eye will only make the whole world blind”.

Peace education provides the means of creating a culture of peace in society. A culture of peace does not only minimize violent incidents from occurring, it reduces the need and the cost which is associated with peacemaking and peacekeeping.

Therefore, join us in the campaign for peace education to be adopted in school curricula from primary to university in Cameroon. The foundation has been reaching out to the vulnerable individuals and communities in the conflict stricken regions of Cameroon with lifesaving assistance in the form of food, medication, seed capital, and psychosocial assistance. Some of many success stories include the story of Christabel!

Christabel shed tears as she shared her testimony. She said she was a very frustrated single mum when she came in contact with Rohi. She had lost all hope in life after being abandoned during pregnancy by her boyfriend who had asked her to abort the pregnancy or take care of the baby herself. She was a housemaid in a rich family when she became pregnant. She had lost her mom who was her only parent while still a kid.

Her uncle, who was supposed to be her legal guardian, had thought she was better fit to be a house help than go to school like his own children. She was sent to be a house help at the tender age of nine. She grew up never knowing her dad and trying to help feed her other siblings who had also dropped out of school. She suffered injustice as she worked for several women and they sent her away without paying her a cent, not minding that she had a son to look after.

Rohi foundation took her through many sessions of counselling and literacy classes. She had wanted so badly to read her Bible but couldn’t as she could not read or write. A few months later, through some partners of Rohi, Christabel had a job as a maid, with a better salary and better working conditions. She had been trained as a hair dresser but couldn’t do much work as she had developed a lumbar spine pain after child birth.

Today Christabel is more stable, mature and happier. She sends her son to school with her earnings and dreams to continue her education and become a nurse. Her employer has doubled her salary, and taken her in as her adopted daughter. It’s with tears that she remembers her past and thanks God for all the trials she’s been through.

Rohi Foundation has acquired a five hectare piece of land in Mankon Village for the purpose of establishing a ‘best practice’ permaculture farm. The farm carries on a range of agro-pastoral activities. Our main aim of the project is to scale up the production and consumption of organic crops produced from a flourishing natural ecosystem. We do integrated farming of crops like: maize, beans, vegetables, peppers, plantains etc. and livestock. Through this farm we seek to train youths in peace-building and permaculture, while employing some, generating food and finances for the assistance of the many Internally Displaced Persons in need of food and also for the promotion of peace-building in the English Speaking part of Cameroon. 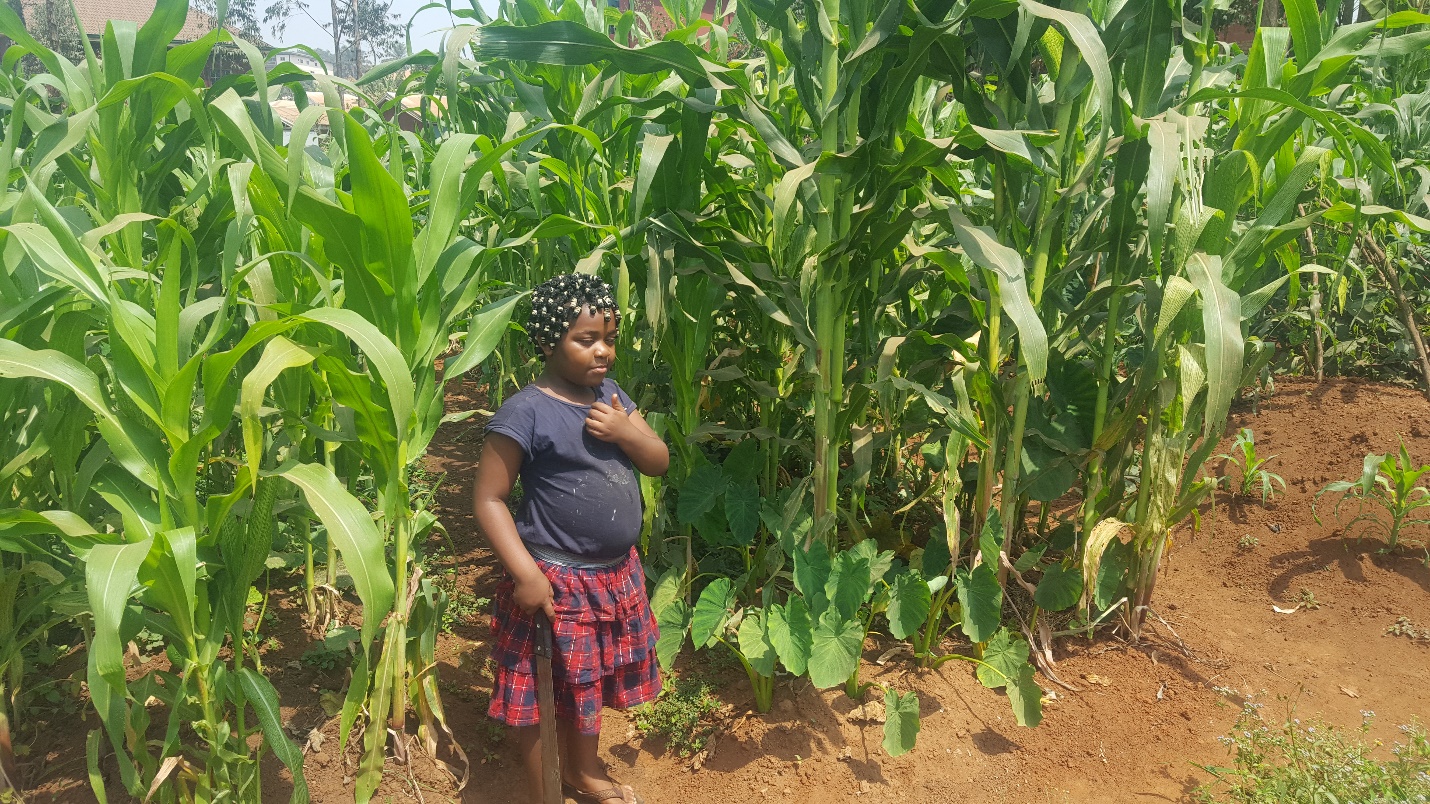 Cameroon, once a peaceful nation has recently become the home to Africa’s most intractable and turbulent conflicts. What has become known as the “Anglophone Crisis” in Cameroon seems hopeless over five years now, especially with the persistent deadlock between the government and separatists. The ongoing tit for tat violence is not only steadily plunging Cameroon into a civil war, but has resulted in thousands of civilian deaths, general insecurity, hostage takings for ransom, extortions, closure and burning of many schools and economic centers, destruction of roads and infrastructure, burning down of villages, horrendous abuses of Human Rights, untold sufferings with hundreds of thousands of refugees in neighboring countries and more than a million internally displaced persons. According to Henrietta Fore, general directress of UNICEF, since 2016, some 850,000 children have been deprived from schooling in the English Speaking part of Cameroon. This crisis has added to the numerous violent conflicts already in Cameroon such as: Boko Haram (a Nigerian jihadi group, into Cameroon’s northern part), and numerous inter-tribal and farmer-grazers conflicts in the Grassfields of Cameroon. Therefore peace, development and morals are really in an endangered state in the country. Significant themes that have dominated the conflicts in the country include proliferation of small arms and light weapons, illegal armed groups, sexual and gender-based violence, and population displacement. In response to the above, Rohi Foundation created the Institute of Peace and Evangelical Theology (IPET). The long-term vision of IPET is to provide students with the analytical, methodological and spiritual tools that can contribute to building capacities to promote peace, resolve conflicts and restore morals in the country and beyond. 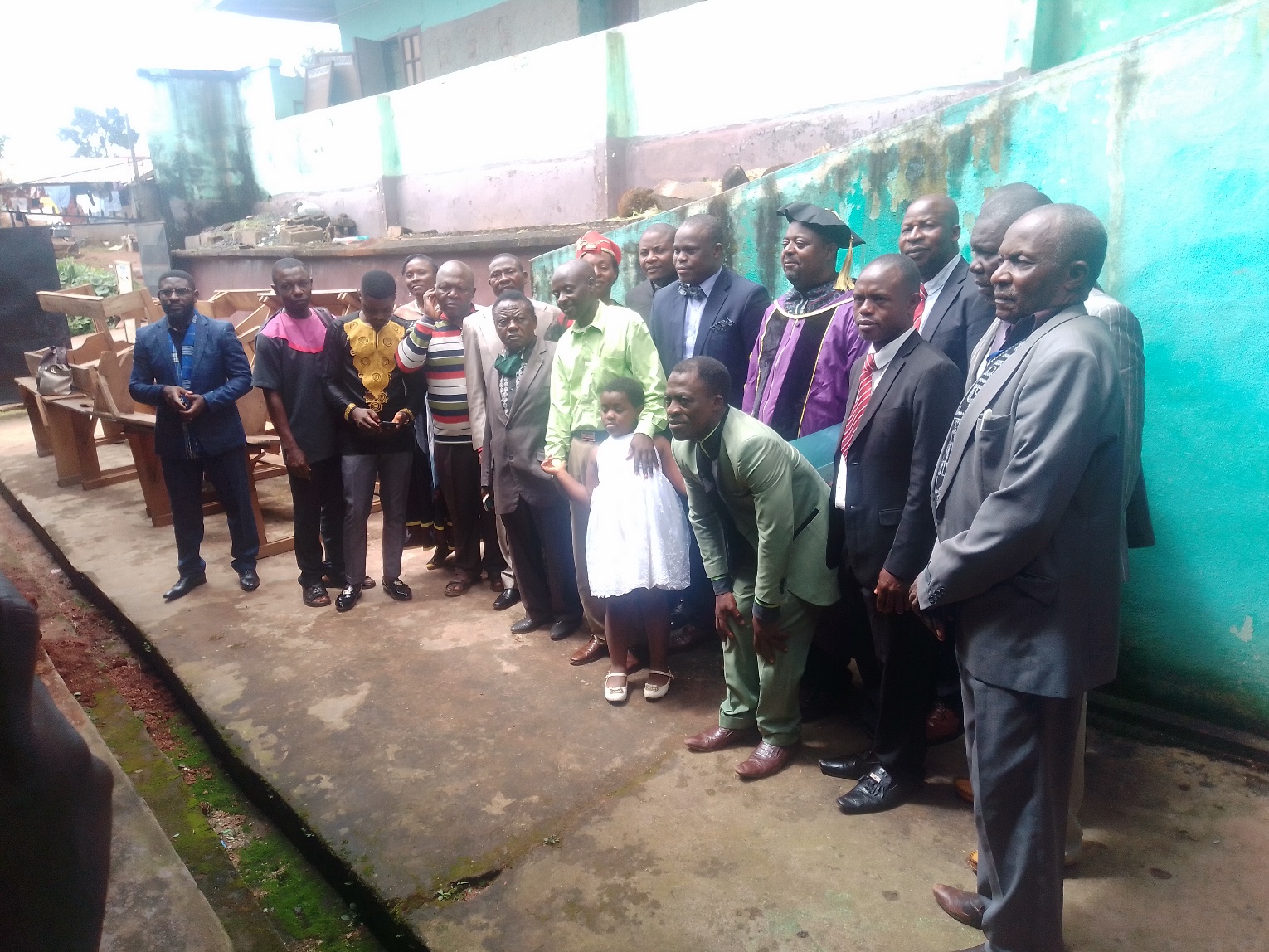 Multiple (Online, Distance and on campus and both evenings and weekends).